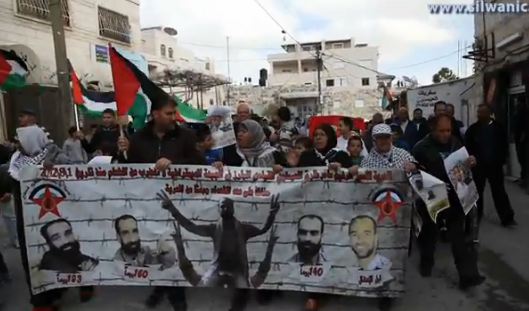 The Information Center reported that the clashes started at the entrance of the Al-Isawiyya, before extending to different parts of the area as the soldiers invaded it firing gas bombs, rubber-coated metal bullets and concussion grenades; eight Palestinians have been injured mainly in the head and eyes.

Hundreds of residents marched from Sheikh Jarrah in occupied East Jerusalem towards the Al-Isawiyya, and the soldiers attacked the protesters by firing dozens of gas bombs and rubber-coated metal bullets.

Soldiers invaded Al-Isawiyya firing more gas bombs and rubber-coated metal bullets, and demolished the protest tent, that was installed in support of hunger striking detainees including Samer Al-Eesawy from Al-Isawiyya.

This is the twenty-fourth time that the army demolishes and removes the tent since Al-Eesawy stated his hunger strike 206 days ago.

Local sources reported that the soldiers also invaded a home and attacked the family while violently searching their property.

The home’s owner, Hassan Mheisin, 42, told the Wadi Hilweh Information Center that as he, his wife 37, and their daughter Aaya, 14, were sitting in the balcony of their home, soldiers invaded the property and started kicking and punching them leading to various cuts and bruises.

Mheisin added that the soldiers also attacked some of his neighbors and sprayed their faces with pepper spray.