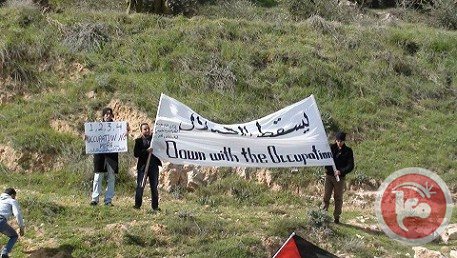 Friday afternoon February 15, Israeli soldiers attacked nonviolent protesters holding their weekly protest demanding the army to reopen the main road that links Hebron city with the nearby towns of As-Sammoa’, Ath-Thaheriyya, Doura, and the Al-Fawwar refugee camp. The road has been blockaded by the army since 12 years. The Maan News Agency reported that the army sprayed the protesters with waste-water, and fired dozens of gas bombs, concussion grenades and rubber-coated metal bullets in addition to attacking and beating several protesters and reporters.

Dozens of Palestinians and international peace activists participated in the protest that was held near the Beit Hagai illegal Israeli settlement in Al-Harayeq area, south of Hebron.

The protesters carried a huge sign that reads “Down with the occupation” in Arabic and English, and also carried Palestinian flags and chanted slogans demanding the army to open the road, Maan said.

They also chanted in support of the Palestinian political prisoners holding hunger strike in Israeli prisons, and demanded Israel to release all detainees.

Dozens of Israeli soldiers, members of the Border Guard units and policemen, were deployed in the area and attempted to kidnap some of the protesters.

Clashes were later reported when dozens of Palestinian youths hurled stones at the soldiers after they used excessive force against the nonviolent protesters.

Mohammad Al-Jabreeny, member of the Popular Committee Against the Wall and Settlements, stated that the protesters managed to break the lock on the gate that was installed by the army 12 years ago separating Hebron from several nearby areas.

Furthermore, member of the Committee for Defending Hebron, Murad Al-Ja’bary, said that this week’s protest also comes to commemorate the Ibrahimi Mosque massacre that was committed 19 years (February 24, 1994) ago by a settler identified as Baroch Goldstein, who opened automatic fire at Muslim worshipers killing 29 and wounding more than 125 before the worshipers managed to kill him.

Goldstein is an American-born Israeli physician who was described after the massacre as an “insane person”.

Al-Ja’bary demanded Israel to grant the Palestinians in the area their legitimate right to freedom of movement, and stated that, by blockading the road, Israel isolated Hebron from nearby areas, adding that the army also blockaded approximately 100 roads by roadblocks or by concrete blocks.

The blockades and the roadblocks heavily restricted the freedom of movement of the residents causing significant financial losses, in addition to isolating Palestinian communities from each other, and forcing the residents to take alternate, mainly unpaved longer routes, just to move from one area to another area in the Hebron district.