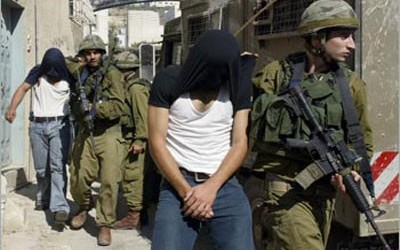 Wednesday at dawn March 6 2013; Israeli soldiers invaded several Palestinian communities in the occupied West Bank, and kidnaped 19 Palestinians, including children, after breaking into their homes and searching them.Local sources reported that the army invaded the Aida refugee camp, in Bethlehem city, and kidnapped two Palestinians identified as Ghassan Fuad, a former political prisoner, and Ra’fat Darweesh.

Soldiers also invaded Beit Fajjar town, south of Bethlehem, and kidnapped five Palestinians in a search campaign that targeted several homes.
The five have been identified as Majdi Mohammad Thawabta, 19, Montaser Hamza Thawabta, 16, Sabri Salim Taqatqa, 23, Ala’ Mahmoud Thawabta, 14, and Aziz Ali Deeriyya, 28. Deeriyya was kidnapped at a sudden roadblock installed by the army at the entrance of the town.

One resident, identified as Rami Hmeidat, 20, was kidnapped in Surif town, west of the southern West Bank city of Hebron.

Furthermore, the army invaded the northern West Bank city of Nablus, and kidnapped several Palestinians. One of the kidnapped has been identified as Baker Ateely, a local reporter and a member of the Journalists Syndicate.

A similar invasion targeted Bazaria village, near Nablus, as the soldiers broke into and searched several homes, and kidnapped two Palestinians identified as Abdullah Sami Hussein, 26, and Hasan Saleh Hussein, 22.

The invasions and arrests are part of an escalating Israeli military campaign that led to the kidnapping of dozens of Palestinians over the last few days.

On Monday, the army also kidnapped more than 19 Palestinians, including several children, in different parts of the occupied West Bank.