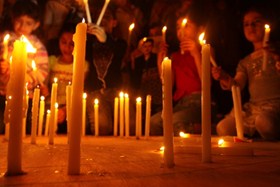 Wednesday evening, March 6, 2013, dozens of Palestinians held a candle vigil at the Manger Square in the West Bank city of Bethlehem to express solidarity with Palestinian detainees held by Israel, especially those holding extended hunger strikes protesting their illegal imprisonment by Israel.The nonviolent protesters slammed the ongoing Israeli violations and abuse practiced against the detainees and their families, and demanded the release of all political prisoners held by the Israeli occupation army.

Head of the Palestinian Prisoners Society (PPS) in Bethlehem, Abdul-Fattah Ekhlayyil, stated that this vigil is an act of solidarity from Bethlehem city, the birthplace of the prophet of peace, Jesus Christ, and added that the Palestinians are united in their legitimate struggle for liberation and independence.

Ekhlayyil also stated that the Palestinian detainees in Israeli detention camps and prisons are facing ongoing violations, abuse and injustice, and added that the International Community, Arab and Islamic countries must act and pressure Israel into stopping its violations, and oblige Israel to end its illegal occupation of Palestine.

He further called for more activities, locally and internationally, in order to highlight the issue of Palestinian political prisoners and the ongoing suffering and assaults they face in Israeli prisons, detention camps and interrogation centers.

In related news, the Ahrar Center for Detainees’ Studies and Human Rights reported last Thursday that Israeli soldiers kidnapped 382 Palestinians, including 10 women and two legislators, in different parts of the occupied West Bank, and the Gaza Strip in February.