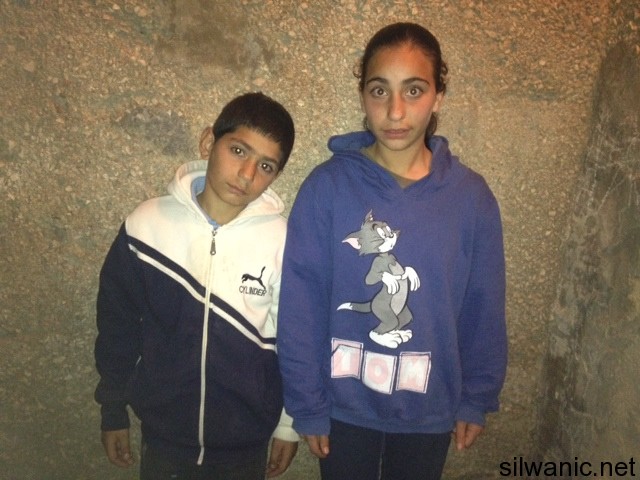 Monday March 18, 2013, Two children identified as Deena Morad Jweiles, 14, and her brother Mohammad, 12, have been kidnapped by the Israeli Police after being attacked and harassed by an Israeli settler in Wadi Hilweh, in Silwan, in occupied East Jerusalem, the Wadi Hilweh Information Center reported.The center said that an Israeli settler, age 14, living in an illegal settlement outpost in Silwan, attacked the two children as they were heading to school, and sprayed pepper-spray at them.

Their father said that Deena and Mohammad were trying to defend themselves, and that his daughter was carrying butter knife in her bag, as she uses it to prepare sandwiches for herself and for her brother.

After being attacked by the settler, she took the knife out and was waving it around in an attempt to scare the settler hoping he would run away.

He added that guards of the “City of David” settlement detained his son and daughter and called for the Police. They were then arrested, and were charged with “attempting to stab” the settler.

They were taken to an Israeli Police station in the Old City of occupied East Jerusalem, and were interrogated for six hours (from 7:30 in the morning until 1:30 in the afternoon).

The two were released on bail (3000NIS each), and Deena was also ordered not to approach or use the Wadi Hilweh road for ten days.

The Wadi Hilweh Information Center said that this was not the first time this settler child attacked the two brothers, as he attacked them on Friday evening while they played in one of the alleys of Wadi Hilweh.

The settler tried to spray their faces with pepper spray, but accidentally sprayed his own face, he also poked the eye of Mohammad, causing a minor injury, and tried to hit the two with a baton he carried.

The Center added that residents of Wadi Hilweh are subject to frequent attacks carried out by settlers and settlement guards, as Palestinian children have been repeatedly sprayed with gas and pepper spray, and that settlers vehicles have rammed several children in numerous hit and run incidents.

It also stated that the children have also been repeatedly subject to verbal abuse and harassment by the settlers, and added that most settler children in Silwan carry pepper spray and cameras, some also carry batons, and frequently walk around the area accompanied by armed settlement guards.