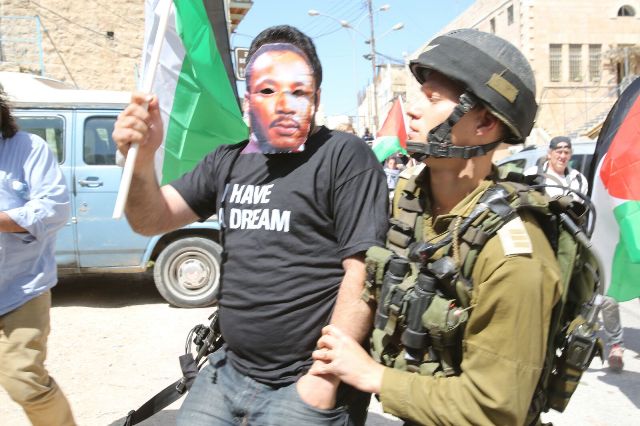 As US President Barack Obama arrived for a two day visit to Israel and the Palestinian Territories, hundreds of Palestinian non-violent activists set up a tent village at Bab al Shams (Door to the Sun) to challenge Israeli settlement policy and the US government’s tacit support for settlement expansion.They say that the US government is complicit in Israeli expansion of settlements, which have taken over much of the Palestinian land in the West Bank in the last twenty years. They told reporters, “An administration [Obama’s administration] that used the veto 43 times out of 79 between 1979 to 2011 in support of Israel and against Palestinian rights, an administration that grants military aid to Israel of over three billion dollars annually cannot have any positive contribution to achieve justice and rights of the Palestinian people.”

The new protest tent village is named ‘Ahfad Younis’, after the main character in the ‘Bab al Shams’ book by Lebanese author Elias Khoury. The book focuses on the plight of the Palestinian refugees, many of whom are still living in refugee camps in neighboring Arab countries including Lebanon for the third generation since their expulsion from what is now Israel in 1948.

Protesters constructed the tent village Wednesday morning near the site of the original Bab al Shams protest village outside Ramallah, which was installed and then demolished by Israeli forces two months ago. During that action, two hundred peaceful Palestinian demonstrators engaged in a sit-in, and were carried off one by one to prison by Israeli soldiers.

This marked a new stage in the Palestinian non-violent resistance movement, which previously focused mainly on non-violent marches at construction sites of the Israeli Wall. Organizers say they get their inspiration from the non-violent anti-colonial struggle in India led by Mahatma Gandhi, and by the civil rights movement in the US.

In a statement, the protesters marked four main aims of their demonstration:
1. To claim our right as Palestinians to return to our lands and villages
2. To claim our sovereignty over our lands without permission from anyone
3. To protect our land from continued confiscation and threat of settlement and colonization
4. To expand popular resistance as one form of resistance, out of many, that our people are engaged in everywhere.

Other protests in parts of the West Bank took place Wednesday as well, including in Hebron where protesters dressed in Martin Luther King masks and sang songs from the US civil rights movement. They said that they hoped to remind President Obama of the history of overcoming racism in the US, and to urge him to take action against similar racist policies enacted by Israel against the Palestinian people.