President Obama in Israel: “That so long as there is a United States of America, Ah-tem lo lah-vahd 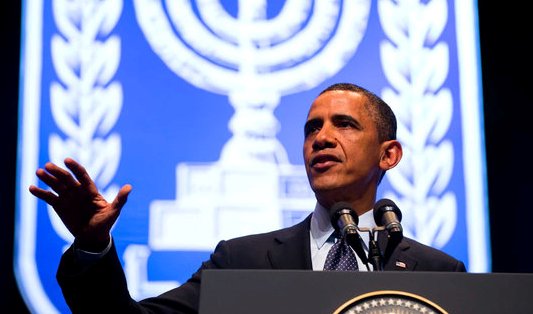 United States President Barack Obama said there is a real chance for peace in the framework of the two-state solution. “I do not say peace guaranteed, but possible,” he said.He added in his speech in Jerusalem that Israel should build peace with the Arab world because peace is necessary, especially that if Israel builds peace now with Arab countries, it is building it with elected leaders instead of the old dictators.

While his statement, Obama insisted that Palestinians should recognize Israel as a Jewish State was received with applause, the statement ‘Israelis must recognize that continued settlement activity is counterproductive to the cause of peace,’ was met with boos.

Obama said in his speech to the young Israelis, “Today, I want to tell you – particularly the young people – that so long as there is a United States of America, Ah-tem lo lah-vahd.” [You are not alone]