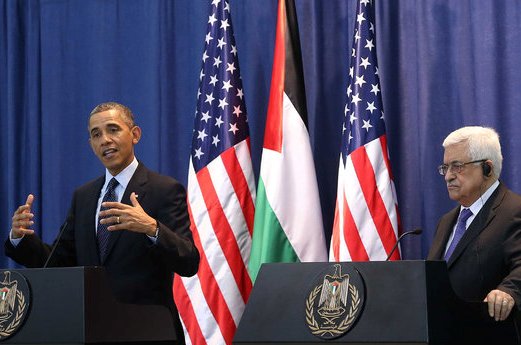 On his second day of the first presidential visit to Palestine U.S. President Barack Obama met with the Palestinian President Mahmoud Abbas in Ramallah.
Although Obama condemned the rocket attacks that hit Sderot, yet, he insisted that the Israelis should not use this as an excuse to avoid negotiations, no more than the Palestinians should insist that Israel halt construction of Jewish settlements in the West Bank as a condition.“If we’re going to be successful, part of what we’re going to have to do is get out of the formulas and habits that have blocked progress,” Obama said in a press conference with Abbas. “Both sides are going to have to think anew.”

Obama was booed when he mentioned that Israel should stop settlement expansion in the West Bank for its counterproductive impact on the peace efforts.
On his part, President Abbas reiterated his demand that Israel stop all settlement construction, but he did not explicitly say this is a pre-requisite for entering into direct talks with Israel which have basically been stalled since 2010.

“It is the duty of the Israeli government to at least halt the activity, so we can speak of the issues,” Mr. Abbas said in Arabic, speaking through a translator. “The issue of settlements is clear: we never gave up our vision, whether now or previously.”

Abbas is scheduled to visit Bethlehem on Friday and visit the Church of Nativity in the city. So far no plans of meeting with officials or grass-roots organizations are declared.

Obama received a number of invitations for visit, including an invitation from Bethlehem University, however, there was no response to these invitations as of today.