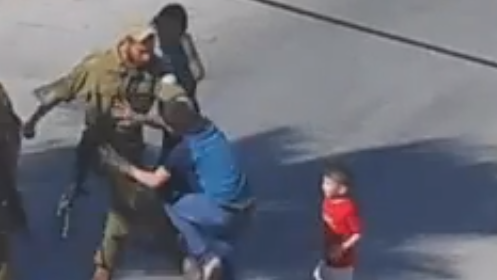 On Saturday afternoon [August 3 2013], a group of Israeli soldiers were seen violently assaulting three young boys in Hebron, in the southern part of the occupied West Bank. In a video filmed by The International Solidarity Movement (ISM), one of the soldiers is seen pushing, kicking and hitting one of the boys, aged 12, before the soldiers chased after his friend running down the street.

Approximately around five in the evening on Saturday, three Israeli soldiers are seen entering the Hebron neighborhood of Tel Romeida.

One of the soldiers, apparently a commander in the Kfir Brigade, starts harassing three young boys walking on the street.

In a video, captured by the International Solidarity Movement, the soldiers are then seen pushing one of the boys.

later on, one of the soldiers, grasps the hair of a second boy, twelve-year-old Islam, before he slaps him and aims a kick towards his head. After this violent episode, the soldiers chased after the third boy who is trying to escape the violence.

The soldiers claimed they were chasing after the boy because he threw stones at them, a claim annulled by the video.

The names of the soldiers remain unknown to time of writing. Usually soldiers involved in such attacks remain anonymous to the public, and even to human rights and legal groups.