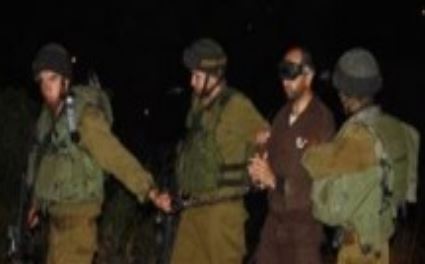 The Ahrar Center for Detainees Studies and Human Rights have reported that Israeli soldiers shot and killed one Palestinian in July, kidnapped 154 Palestinians in different parts of the occupied West Bank, and five Palestinians in Gaza.The Center said that the five Palestinians who were kidnapped in the Gaza Strip were patients who have been taken prisoner at the Erez terminal despite being authorized by Israel to leave Gaza for medical treatment.

Ahrar added that most arrests that were carried out by the army in the West Bank took place in the Ramallah district as the soldiers kidnapped 45 Palestinians last month.

The southern West Bank district of Hebron witnessed the second largest number of arrests as the soldiers kidnapped 35, following by Jerusalem, 30, Jenin, 20, Bethlehem, 10, Tulkarem, 4, Qalqilia, 8, and two in Salfit.

It also stated that 12 Palestinians have been kidnapped on various military roadblocks installed in different parts of the occupied West Bank.

One Palestinian was also taken prisoner at the Al-Karama Border Terminal between the West Bank and Jordan.

In addition, soldiers kidnapped a former Palestinian political prisoner, identified as Mohammad Jamal As-Sa’dy, from Sielet Al-Harithiyya near the northern West Bank city of Jenin, as he was heading to Jordan for medical treatment. He suffers various fractures in his leg and required further.

Soldiers also kidnapped Dr. Fadi Aseeda, 33, from Tal village near Nablus, as he was returning from Malaysia where he received his PHD degree in Arabic Language.

Furthermore, soldiers shot and killed a Palestinian youth identified as Mo’taz Sharawna, during clashes that took place after the army invaded Doura town, near Hebron.

Fuad Al-Khoffash, head of the Ahrar Center, stated that the soldiers invaded Palestinian communities in the occupied West Bank every single night, and added that those invasions include areas that are supposed to be under Palestinian sovereignty.

Al-Khoffash said that the number of arrests could be more than the reported 159 as this number only reflects the confirmed and documented arrests.