Israel To Build 230 Units In An Illegal Settlement 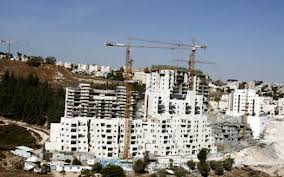 The Popular Committee against the Wall and Settlements in Hebron have reported that Israel approved the construction of 230 units in the Ma’on illegal settlement, built on Palestinian lands east of Yatta town, near the southern West Bank city of Hebron.Rateb Jabour, Coordinator of the Popular Committee, told the Radio Bethlehem 2000 that Israel plans to illegally confiscate nearly 4000 Dunams of Palestinian lands that belong to the families of Ash-Sha’abeen, Roomy, Abu Sabha, Ash-Shawaheen, al-Hathaleen, and Shinraan.

The lands in question are located in the local communities of Um Al-Kheir, Um Hatba, and Khalayel Az-Zattoun.

Jabour added that Israel plans to start the construction in 60 days.

Israeli settlements in occupied Palestine, including in occupied Jerusalem, are built in direct violation of the International Law and the Fourth Geneva Convention.

The West Bank and East Jerusalem are considered occupied territories under International Law and all related United Nations and Security Council resolutions.

Under Article 49 of the 1949 Geneva Convention (IV) Relative to the Protection of Civilian Persons in Time of War, all Israeli settlement activities constitute a violation of international humanitarian law, the Palestinian Center for Human Rights (PCHR) reported.

The recently resumed direct talks between Tel Aviv and Ramallah are facing various obstacles that could topple all international efforts to resume and maintain talks meant to achieve a final-status peace agreement.

Israel insists in continuing its illegal settlement construction and expansion activities in the occupied territories, including in and around occupied East Jerusalem. Israel’s settlements and its Annexation Wall have isolated the Palestinian communities from each other, and isolated the villagers from their lands and orchards.

Other vital issues that obstruct talks are Israel refusal to recognize the internationally guaranteed Right of Return of the Palestinian refugees, its rejection to talks on borders, natural resources, and its rejection to a full withdrawal from all territories it illegally captured in 1967, including Jerusalem.