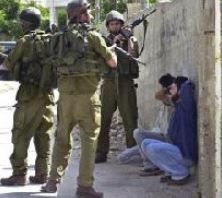 Several armored Israeli military vehicles invaded, on Wednesday at dawn [August 7 2013], the northern West Bank city of Jenin, and kidnapped one resident; clashes and injuries have been reported. One resident was also kidnapped in Bethlehem.Local and medical sources in Jenin have reported that more than 12 military vehicles invaded the city just before dawn prayers, and added that the invasion targeted the southern area, especially the Jaffa Street area.

At least two Palestinians have been treated for the effects of teargas inhalation, while the soldiers also broke into the home of resident Abdul-Halim Ezzeddeen, violently searched the property and kidnapped him before taking him to an unknown destination.

Local sources said that Ezzeddeen, a political leader of the Islamic Jihad Movement, was interrogated in his home before the army kidnapped him.

Furthermore, clashes took place at the Ministry Of Interior Junction in the city, while the soldiers fired dozens of gas bombs and rubber-coated metal bullets at local youths who hurled stones and empty bottles at the invading soldiers.

In related news, dozens of soldiers invaded the Teqoua’ village, west of the West Bank city of Bethlehem, and kidnapped one resident identified as Mohammad Nasser Ta’amra, 20.

Local sources said that the soldiers searched the home of Ta’amra before kidnapping him.