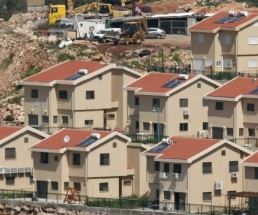 Israeli sources have reported Tuesday that Jerusalem City Council head, Nir Barkat, and Israeli Housing Minister, Uri Ariel, intend to place the cornerstone of a new settlement, in Jabal Al-Mokabbir, south of occupied East Jerusalem.The sources said that the new settlement will be dedicated this coming Sunday, and will include dozens of units for Jewish settlers.

Palestinian researcher, specialized in settlements affairs, Ahmad Sob-Laban, stated that the Israeli “Construction and Planning Committee” authorized, on July 29, the construction of the new settlement in Jerusalem.

He added that the plan aims at building 63 units in three buildings, located close to a kindergarten in Jabal Al-Mokabbir.

The researcher said that this would be the second settlement to be built in the heart of Jabal Al-Mokabbir, as the first is called Nof Ezion, and added that Israel also illegally confiscated lands in Jabal Al-Mokabbir and Sur Baher to build the Armona Natzif settlement, west of the town.

“This is an old plan that was approved in 2008, a license to build foundations, parking lots, and infrastructure was granted”, Sob-Laban said, “The new issue here is authorizing new constructions for the settlement in the twon”.

He further stated that an Israeli company, known as Yumnah, is connected to financing and building various outposts in the heart of Arab neighborhoods in occupied East Jerusalem.

“This is a strategy meant at creating facts on the ground, to prevent any Israeli withdrawal from the occupied city”, the researcher added, “Those settlement activities aim at placing obstacles in front of any attempt to reach a peace agreement and a two-state solution”.