Second Round Of Talks Ends Without A Statement 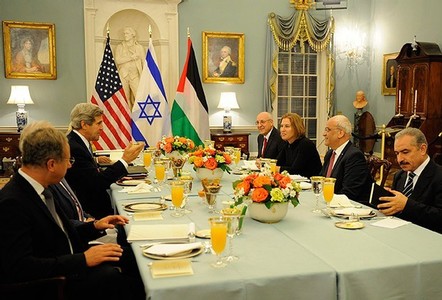 Israeli and Palestinian negotiators held their second round of direct talks, without American supervision, and following five hours of talks, they decided to schedule another meeting in the coming few days, without setting a specific date for this meeting.Israeli daily, Haaretz, quoted a senior Israeli official stating that the meeting with the Palestinian side was “serious and long.”

The official added that Israeli and Palestinian negotiators “preferred to hold the meeting without the American mediators”, and that they will inform U.S. envoy, Martin Indyk, of the details of their meeting later on.

According to the official, American officials might join the next round of direct Palestinian-Israeli talks next week, probably in Jericho or the central West Bank city of Ramallah.

Haaretz added that the latest round of talks was held away from the media, and ended without any statement, adding that only one picture was taken by the Israeli Government Press Office.

The two sides met even before the media was informed; the press was only informed after the meeting had started.

The negotiators discussed general guidelines with no specifics on various issues, while the Palestinians expressed their rejection to the newly approved plan aiming at the construction of hundreds of units for Jewish settlers in the occupied West Bank, and occupied East Jerusalem.

On Sunday, Israel officially announced the construction plan of 1200 units in occupied East Jerusalem, and in settlement blocs around the city.

The announcement came only a week after Israel approved another plan to build hundreds of units in isolated illegal settlements in the West Bank.

The United States said that the move was unproductive, and could jeopardize the efforts to resume direct peace talks between Israel and the Palestinian Authority.