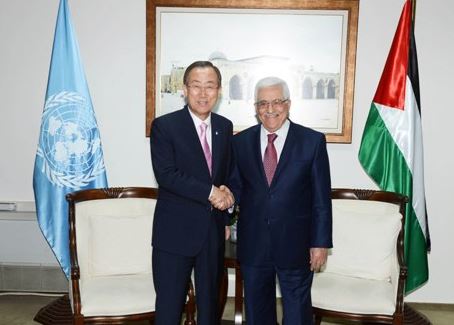 The two leaders held a press conference following their meeting; President Abbas said that the first round of direct talks, which started on Wednesday, discussed all final status issues, such as Jerusalem, borders, settlements, refugees, the detainees and security.

Prior to the meeting, the UN head visited the grave of late Palestinian President, Yasser Arafat, and placed roses on the grave.

Abbas added that he hopes all final status issues will be resolved in the set timeframe for the direct talks within six to nine months.

“It is too early to say that we achieved something, or did not achieve anything”, Abbas said, “We hope we will have some answers that in the coming days”.

The president further stated that the Palestinians went to direct talks with sincere and true intentions to achieve a just and comprehensive peace agreement, adding that he hopes Israel has the same intentions.

“Israel must understand that its settlements in occupied Palestine are illegitimate, and must stop all settlement construction and expansion activities; settlement are illegal, the International Community knows that, so do we”, Abbas said, “Israel should also release all of the Palestinian political prisoners, and should show positive intentions in the talks”.

On his part, Ki-moon stated that he came to the West Bank to reaffirm the legitimate Palestinian right of self-determination, and the right to establish the state that should have been established a very long time ago.

He welcomed the resumption of direct talks between Ramallah and Tel Aviv, and thanked the United States, especially Secretary of State, John Kerry, for his efforts.

The international official further called on both sides to refrain from activities that jeopardize peace talks, and expressed deep concern regarding Israel’s recent decision to build hundreds of units for Jewish settlers in occupied Jerusalem, and the occupied West Bank.

He added that settlement activities obstruct talks, and render the two-state solution impossible.

Ki-moon also welcomed the release of dozens of detainees from Israeli prisons, and added that he is concerned regarding the fate on 5000 Palestinian political prisoners still imprisoned by Israel, especially the detainees who are held without trial or charges, and holding extended hunger strikes.

He also stressed on the importance of Freedom of Movement to the Palestinians, and added that the Palestinian people in the Gaza Strip suffer from some of the grimmest humanitarian conditions due to Israel’s siege and violations.

He said that negotiations with Israel are not a replacement for national Palestinian reconciliation, adding that reconciliation is needed to that a real and lasting peace can be achieved.

Ki-moon added that the international community must not forget that there are 5 million Palestinian refugees, still suffering from harsh conditions in refugees camps in Palestine, and in various Arab countries, and added that the UN is doing whatever it can to alleviate their suffering.