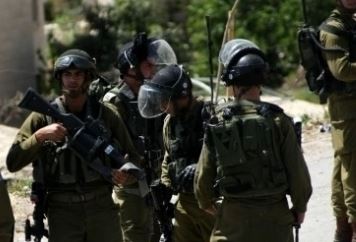 Israeli soldiers kidnapped on Friday evening [August 23, 2013] nine Palestinians in Anata own, north of occupied East Jerusalem, and at a roadblock east of the northern West Bank city of Jenin.Local sources in occupied Jerusalem stated that undercover forces of the Israeli army kidnapped four Palestinians during clashes that took place in Anata after the army invaded it and assaulted a number of residents.

The sources said that two of the kidnapped residents have been identified as Mohammad Hilwa, 19, and Mohammad Abdul-Latif, 21.

The undercover forces further invaded a local gas station, and shut it down for two hours before confiscating surveillance cameras and tapes.

Furthermore, soldier stationed at the Jalama roadblock, east of the northern West Bank city of Jenin, kidnapped five Palestinians and took them to an unknown destination.

Israeli soldiers conduct daily violations, including invasions and arrests, in different parts of the occupied West Bank, including in occupied Jerusalem.