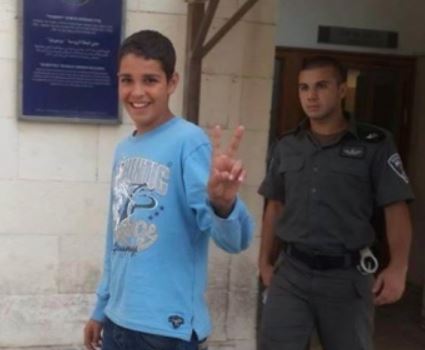 The District Police in occupied East Jerusalem released on Friday evening [August 23, 2013] a Palestinian child after detaining him for two days, and ordered him under house arrest.The family of the Child, Nour Salim Shalaby, 15, was also ordered to pay a 500 NIS fine, as ruled by the Israeli District Court in Jerusalem.

Omar Shalaby, secretary of Fateh movement in Jerusalem, stated that the Israeli court ordered the child away from the Al-Aqsa Mosque, Bab Al-‘Amoud and the Old City of Jerusalem for one month.

The Police kidnapped Shalaby last Wednesday as he was crossing a border terminal heading back home with his family following a visit to Jordan.

Also on Friday, the Israeli District Court in Jerusalem refused to release two children, identified as Tha’er Mheisin, 15, and Ali Mheisin, 17, and decided to hold a court hearing this coming Sunday.

The Israeli prosecution intends to indict the two children, claiming they hurled stones at an Israeli bus.

Back on May 29, the Israeli police kidnapped an 11-year-old child, identified as Saif Roweidi, and interrogated him for several hours before he was released. He was kidnapped as he, and his sister, 15, were heading back home from school. He was also ordered under house arrest.

On May 22, the Police kidnapped five Palestinian children in Silwan, in occupied East Jerusalem, after claiming that they [13-15 years old] “attacked an Israeli settler”.

Dozens of Palestinian children have been kidnapped, and imprisoned, by the Israeli army and police since the beginning of this year.

They were interrogated for hours without the presence of a lawyer of a parent.

In one of the incidents, the family of Majdi Abu Tayeh, 13, and his cousin, were forced to pay fine, and the two children were forced under house arrest for more than a week.

The court even ruled that when Tayeh goes to school, one of his parents or brothers must accompany him, including when he heads back home.

Local sources and human rights groups, in Silwan, stated that dozens of children have been kidnapped, violently and illegally interrogated, and were released after their families paid fines.

Back in January of this year, Israeli soldiers and police officers kidnapped 143 Palestinians from different areas in occupied East Jerusalem; more than half of them were children, mainly 12-14 years of age.

One child, identified as Mohammad Ali Dirbas, was only 8 when he was kidnapped, and was interrogated without his family present, or any legal representation, for more than two hours.