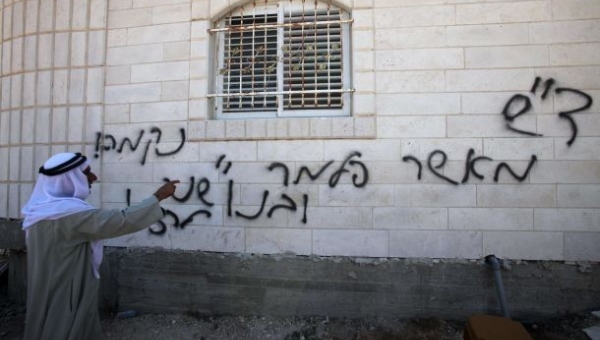 Monday August 26, 2013, a number of Israeli extremists wrote racist graffiti on a wall of a local Palestinian home, in Al-Khan Market area in the Old City, in occupied East Jerusalem. Soldiers demolish a garage and a chicken farm in El-Isawiyya, in East Jerusalem.The settlers wrote “Price Tag”, and other racist graffiti, and tried to escape but the Israeli Police managed to apprehend them. The Police said that the six assailants have been caught carrying paint containers.

Media Coordinator of the Follow-up Committee in the town, Raed Abu Ryala Al-Eesawy, told the Radio Bethlehem 2000 that Israel is demolishing Palestinian property in the area as part of its illegal campaign to confiscate Palestinian property and lands so that it can build its “National Gardens” area.

Four days ago, Israeli extremists threw a Molotov cocktail at a Christian Monastery in the Deir Jamal area, between Jerusalem and Ramla.

On Friday [June 7 2013], Israeli extremists burnt a Palestinian car in Sheikh Jarrah neighborhood.
Dozens of Price Tag attacks have been carried out against Churches, Mosques, Islamic and Christian graveyards.

Such attacks also targeted Palestinian lands and orchards [including burning and uprooting dozens of trees and farmlands], Palestinian property, and in some cases targeted Israeli peace groups.

Some Price Tag attacks have been carried out against property of Israeli leftists and peace groups.