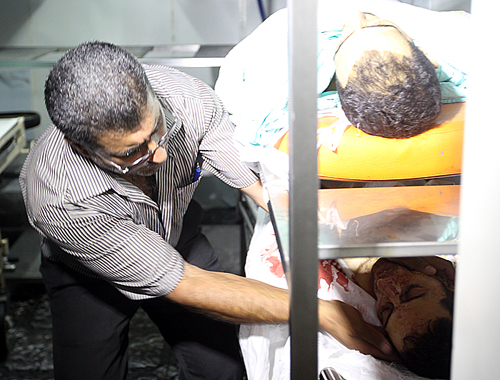 Palestinian medical sources have reported that the number of Palestinians killed by Israeli army fire in the Qalandia refugee camp, north of occupied Jerusalem, arrived Monday at dawn to find three people dead and dozens of residents injured, some seriously.The sources said that Younis Jamal Jahjouh, 22, a former political prisoner, was killed by rounds of live ammunition fired by Israeli soldiers invading the camp.

Earlier on Monday at dawn, two Palestinians, identified as Rubin Ziad, 32, and Jihad Aslan, 19, have been shot and killed by live rounds fired by the army.

Medical sources said 15 Palestinians have been shot by rounds of live ammunition, and that most of the injuries are in the upper parts of their bodies.

Dozens of residents have been injured by rubber-coated metal bullets, while others have been treated for the effects of teargas inhalation.

Palestinian medical sources have reported that two Palestinians have been shot and killed by Israeli military fire on Monday at dawn [August 25, 2013] after dozens of Israeli soldiers invaded the Qalandia refugee camp, north of Jerusalem, and clashed with local youths. At least fifteen Palestinians have been injured, some seriously.

Local sources have reported that dozens of soldiers invaded the camp, broke into and searched several homes, searching for a resident, an issue that led to clashes between the invading soldiers and dozens of local youths.

Medical sources at the Palestine Medical Center, in Ramallah, said that Robin Zayed, 32, and Jihad Aslan, 19, have been shot and killed by live rounds fired by the invading Israeli soldiers, the Palestinian News & Info Agency (WAFA) has reported.

Fifteen more Palestinians have also been shot and injured by rounds of live ammunition; some suffered serious injuries, while the rest suffered mild-to-moderate wounds. Dozens of residents have been treated for the effects of tear gas inhalation.

Mohammad Samhan, head of the Urgent Care Unit at the Red Crescent Society in Ramallah, stated that the society received dozens of calls regarding a large number of injuries in Qalandia, and that its ambulances rushed to the refugee camp and moved the wounded to the Palestine Medical Center.

He added that Aslan, one of the slain residents, was shot by multiple rounds of live ammunition fired at him by undercover soldiers of the Israeli army.

Local sources said that the undercover soldiers infiltrated into the camp to kidnap a former political prisoner who was imprisoned by Israel for 10 years, and was only released approximately a month ago.

The former political prisoner was kidnapped by the army, and shortly afterwards, dozens of local youth hurled stones and empty bottles at them, and the soldiers fired dozens of rounds of live ammunition leading to the large number of casualties.

A week ago, soldiers shot and killed a young man identified as Majd lahlouh, after dozens of Israeli military jeep invaded the Jenin refugee camp, near the central West Bank city of Jenin.

Several Palestinians have been injured. The army was looking for a member of the Islamic Jihad in the camp.