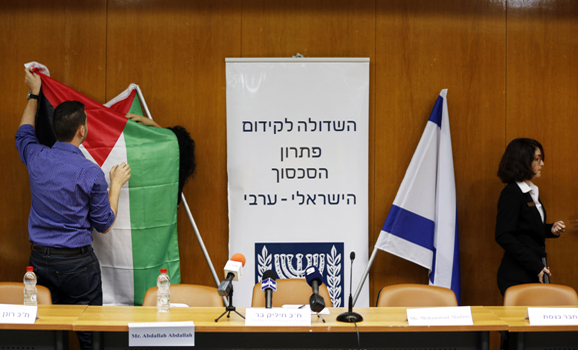 Hanan Ashrawi, with the Palestine Liberation Organization, said ‘Israel’s use of excessive and indiscriminate violence and live ammunition in densely populated civilian areas represents a blatant violation of international and humanitarian law.’

Ashrawi added, ‘We call on the members of the United Nations Security Council, the Quartet and the rest of the international community to take serious measures to bring an immediate end to the killing of innocent civilians and to terminate Israel’s impunity.’

The decision to call off the scheduled round of peace talks came after Israeli troops attacked Palestinian demonstrators in Qalandia refugee camp with lethal force, killing three demonstrators.

Meanwhile, the United States claimed that there has been no meeting planned for Monday, therefore ‘no meeting has been cancelled’.

One of the three slain Palestinians, identified as Rubin Ziad, works for the United Nations Relief and Works Agency (UNRWA), and was on his way to work when Israeli forces shot him dead.

The Israeli military has killed three adults and three children, aged 3, 4 and 13, in the last two months, and wounded dozens more. All of the victims were civilians. No Israelis were killed or injured in that time period.