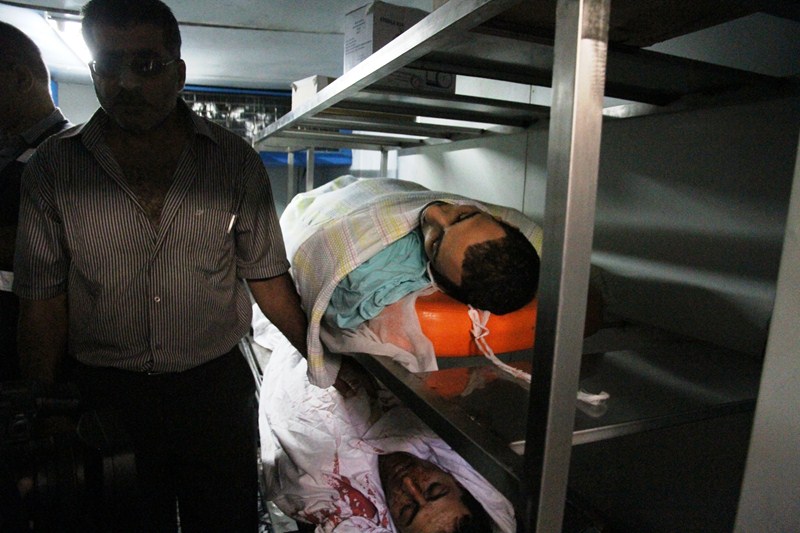 Clashes took place in different parts of the occupied West Bank Monday [August 26, 2013] after Israeli soldiers invaded the Qalandia refugee camp earlier at dawn, north of Jerusalem, shot and killed three Palestinians, and injured dozens of residents, including at least 15 who were shot by live ammunition.Clashes took place near the Qalandia terminal, while dozens of injuries have been reported as the soldiers fired live rounds, rubber-coated metal bullets, gas bombs and concussion grenades.

The Palestinian News & Info Agency (WAFA) has reported that dozens of soldiers invaded the Aida refugee camp, in Bethlehem, and clashed with dozens of local youths who hurled stones and empty bottles at the invading soldiers.

Medical sources said that several Palestinians in the camp were shot by rubber-coated metal bullets, while dozens suffered the effects of teargas inhalation.

Clashes also took place in Hebron, in the southern part of the occupied West Bank, especially in the Az-Zawiya area, and Be’er As-Sabe’ Street in the center of the city.

Local sources in the city have reported that scores of soldiers also broke into and searched dozens of homes, and occupied their rooftops using them as monitoring towers.

Israeli daily, Haaretz, said that the army kidnapped 30 Palestinians in Qalandia during clashes that took place after the Palestinians held the funeral ceremonies of the three slain Palestinians.

It said that the army started in “investigation” in what happened after undercover soldiers of the Israeli military infiltrated into the refugee camp to “arrest some wanted Palestinians”.

The army said that “it seems that soldiers did not expect the invasion to be turned into violent clashes”.

Amos Harel, a leading media expert on military affairs at Haaretz, questioned the motives of this infiltration and, invasion into the refugee camp, and why this invasion took place in the midst of the newly resumed fragile direct peace talks between Israel and the Palestinians.

Nabil Abu Rodeina, spokesperson of Palestinian President Mahmoud Abbas, strongly denounced the Israeli invasion and the killing of the three Palestinians, and said that the invasion “is part of a series of crimes carried out by Israel, and part of Israel’s ongoing violations and escalating settlement construction and expansion activities”.

His statements came during a press conference held with Palestinian Foreign Minister, Riyad Al-Maliki, in the central West Bank city of Ramallah.

He said that the Israeli escalation and violations limit the chances of successful peace talks, and stated that a Palestinian State must be established next to Israel, with occupied East Jerusalem as the capital of this state.