‘They confiscated my only source of livelihood’ 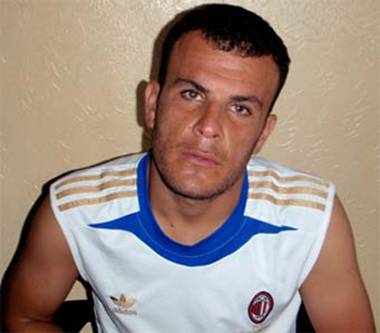 Khader Merwan Al Seidi (26) is one of Gaza ‘s fishermen and a victim of the repeated military attacks carried out by Israeli forces against fishermen in the Gaza Sea .

Khader is the breadwinner for a family of 14 members. He is married with a one-year-old child, and resides with his extended family in a house in Shati refugee camp.

The camp, located along the Gaza shore, is home to most of Gaza ’s fishermen, for whom the sea is their main source of livelihood. On 13 August 2013, Khader left his home early in the morning, and made his way to Gaza seaport.

From there, he sailed west, remaining within the Israeli-imposed limit of 6 nautical miles offshore, to fish for the day. However, Khader was attacked by Israeli naval forces, arrested, and interrogated, and his boat and fishing tools were confiscated. Khader was released 15 hours later.

Khader describes the incident as follows: ‘At around 12 am, I sailed from Gaza seaport on my boat with three of my fisherman friends, one of whom accompanied us on another boat. We sailed to the west until we reached 6 nautical miles off shore. We threw the fishing nets into the sea but, after a while, the engine of the other boat broke down…’

‘We helped our friend by taking him to shore. It was around 3:30am when we returned in my boat to the place where we had thrown our nets in order to retrieve them. Suddenly, I heard the sound of a whistle coming from an Israeli gunboat, which approached and started to shoot at us. The gunboat was accompanied by two small rubber dinghies on which there were a number of Israeli soldiers. The three boats surrounded our boat…’

‘There was no prior warning. They started shooting directly at us. It seemed like a trap, since they had allowed us to throw our nets in earlier. In the past, they used to shoot at us even before we threw our nets.’

‘I immediately cut the net in order to flee, but I was injured in the intensive shooting by a rubber-coated bullet to my right hand. One of my friends attempted to sail the boat after I was injured, but he was hit by rubber bullets to the back and chest. Suddenly, I saw one of the small Israeli boats passing out our boat..’

‘The engine of our boat was shot and another of my friends was injured, so our boat stalled amidst the continued shooting. One of the Israeli soldiers boarded the boat and started shooting at the engine which was completely destroyed. Another of the soldiers forced us to take our clothes off and jump onto one of the dinghies.”

‘We were in a state of fear and panic due to the continued shooting around us. One of the Israeli soldiers asked, ‘Where were you fishing?’ I answered that I had been fishing within the 6-mile limit.

However, he insisted that I was outside the limit. We were transported in the dinghy for around 15 minutes, and then we were transferred to the Israeli gunboat, where they handcuffed us and covered our heads.

We stayed there from approximately 4 a .m. until 11am. The sun was hot and we were constantly beaten. My boat, which is my only source of livelihood, was confiscated again. The Israeli gunboat then took us to Ashdod port. We were taken to a room to receive medical treatment’

‘At approximately 2pm, we were individually questioned for a few minutes each. The interrogator was very sarcastic while interrogating me. He joked about how frequently my boat had been confiscated, without any consideration for how painful that was for me. When I told him that fishing was my only source of livelihood, he replied that that was not his concern.

He asked me for information on other fishermen. He asked me to sign a document in Hebrew which I did not understand. I refused and asked him to read to me what was written. He had written that I had initiated the attack on the Israeli soldiers, as well as many other claims, so I refused to sign. I also refused to be transferred to an Israeli hospital despite my poor condition. I was afraid.’

At approximately 4 pm, Khader a long Hasan ‘Ali Hasan Murad (27), Mohammed Jamal Hassan al-No’aman (28), and his brother Hasan (27) were transferred, handcuffed, by bus to the Beit Hanoun (‘Erez’). They were then taken to Shifa Hospital in Gaza in order to receive medical treatment.

This is the second time in three months that Khader’s boat and fishing instruments have been confiscated. The first incident occurred on 5 June 2013. Khader states:

‘I still have not received any information about the previously confiscated property. I know that what they took will not be returned. The first boat confiscated was my own. When it was confiscated, I got a loan to buy an engine to put on another boat. I still haven’t paid for the loan. The second boat is not mine. It belongs to some relatives. Now, I have to pay for the engine and the boat.’

Devastated by the resulting financial burdens, Khader has not been able to resume fishing or provide properly for his family. Khader explains: ‘I have been watching my family starve for the past week. Fishing is not a consistent source of livelihood in Gaza. Sometimes, I earn what feeds my children for the day, sometimes for the week and sometimes, I get nothing at all.’

These constant attacks also result in social instability and tension within the family. Khader’s mother, Um Khader, explains how difficult it is to live in the house of a fisherman who has had all of his property confiscated and is incapable of compensating for his financial loss: ‘They shout all the time. They are angry and helpless.’

Knowing the risks fishermen face on a daily basis, Um Khader wishes that her son had learned any other profession.

‘This time last week, when Khader did not arrive home at his usual time, we became worried. We thought his engine might have stalled. We thought he might have drowned in the sea. His relatives went out to sea to look for him, but in vain. No one told us that Khader and his friends had been injured and imprisoned. I waited for him along the shore with his wife from 10am until 7pm when they finally called. He usually gets home at around 10am. When he doesn’t arrive by then, I know that something bad must have happened to him.’

Khader knows no other profession but fishing, in which he has been working for the past seven years. However, for him, the Israeli decision to increase the fishing area to 6 nautical miles has had no significant impact, but has rather increased the risk to both his life and his property.

He states: ‘What is the use of increasing the fishing area to 6 miles when they will eventually confiscate our property and our fishing tools in front of our eyes? How can it alleviate the fishermen’s suffering when we are no longer sure if we are fishing in the right place? We never know whether we are going to be left to fish in peace or if we will be the subject of Israeli attacks.’

Khader was arrested while fishing within the Israeli-designated 6 nautical mile limit. Israel has unilaterally imposed an illegal ‘buffer zone’, an area prohibited to Palestinians along the land and sea borders of the Gaza Strip.

The precise area designated by Israel as a “buffer zone” is unclear and this Israeli policy is often enforced with live fire. In accordance with the ceasefire agreement that ended Israel ’s last military offensive on the Gaza Strip in November 2012, the Israeli Coordinator of Government Activities in the Territories (COGAT) in an online statement on 25 February 2013 declared that fishermen could now access the sea up to 6 nautical miles offshore instead of the previously-imposed 3 nautical miles.

However, this reference, along with the reference to the increased land area, was later removed from the statement. On 21 March 2013, the Israeli forces’ spokesperson announced re-reducing the fishing area allowed for Palestinian fishermen from 6 nautical miles to 3 nautical miles.

However, on 21 May 2013, Israeli authorities decided to allow fishermen to sail up to 6 nautical miles once more. The arbitrary and changing parameters of the so-called ‘buffer zone’ have led to huge confusion among fishermen. As a result, the sea, their main source of livelihood, can only be accessed with high risk.

Preventing Palestinians from accessing their fishing areas violates numerous provisions of international human rights law, including the right to work, the right to an adequate standard of living, and the right to the highest attainable standard of health. Enforcing the “buffer zone” through the use of live fire often results in, inter alia, the direct targeting of civilians and/or indiscriminate attacks, both of which constitute war crimes.

Israel ’s attacks against Palestinian fishermen in the Gaza Strip constitute a violation of international humanitarian law as codified under Article 147 of the 1949 Fourth Geneva Convention. Moreover such attacks can constitute war crimes under Articles 8(2)(a)(i) and (iii) Article 8 (2)(b)(i) of the International Criminal Court’s Rome Statute.

The implementation of the ‘buffer zone’, maintained through attacks, constitutes a measure of collective punishment, which is prohibited under Article 33 of the 1949 Fourth Geneva Convention. The right to work, including in just and favorable conditions, is provided for under Article 6 and 7 of the International Covenant on Economic, Social and Cultural Rights (ICESCR).

Moreover, Article 11 of the ICESCR recognizes ‘the right of everyone to an adequate standard of living for himself and his family, including adequate food, clothing and housing, and to the continuous improvement of living conditions.’