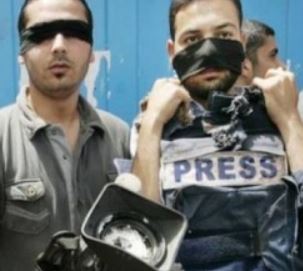 Media sources in Gaza has reported that a number of young masked men, apparently unarmed, attacked a Palestinian journalist in Gaza City, the Palestine News Network (PNN) has reported.The sources said that the masked men attacked Ahmad Al-Fayyoumi in Al-Rimal Street, close to the Al-Yarmouk playground, and violently beat him.

The masked men also stole the mobile phone of Al- Fayyoumi, and his laptop before fleeing the area. Al-Fayyoumi works for the Slab News Agency, a daily paper based in Beirut, Lebanon.

In other news, two Palestinians have been injured during a scuffle that took place between Fateh and Hamas supporters at the Birzeit University, near the central West Bank city of Ramallah.

Eyewitnesses have reported that the scuffle took place following a dispute on a protest against political arrests carried out by the Palestinian Authority in the West Bank.

Students of the Islamic Bloc at the University stated that Bloc members wanted to continue their protest in front of the Student Senate, while Fateh members demanded moving the protest to a different location, and to make it a protest against a recent increase in students’ tuition.

An Islamic Bloc member and a university security guard have been injured, one of them was hit in the head by a stone, apparently thrown by a student during the scuffle, while the other suffered cuts and bruises. Both were moved to the Palestine Medical Center in Ramallah.