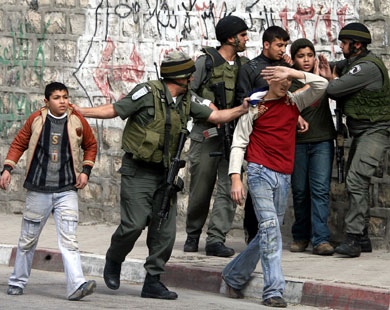 Local sources have reported that Israeli soldiers kidnapped, on Tuesday evening [August 27, 2013] eight Palestinians, including five children in Al-Isawiyya village, and in Bab Al’Amoud, in occupied East Jerusalem.Member of the Follow-up Committee in Al-Isawiyya, Mohammad Abu Al-Hummus, told the official Palestinian News & Info Agency (WAFA), that the soldiers kidnapped three residents during clashes that lasted for two hours. One of the kidnapped has been identified as Ahmad Daoud Obeid.

Abu Al-Hummus said that the soldiers fired dozens of gas bombs and concussion grenades, and that several residents have been treated for the effects of teargas inhalation.

Furthermore, soldiers kidnapped five Palestinian children [14-16 years old] in Bab Al-‘Amoud area, in the center of occupied East Jerusalem, and took them to an interrogation facility in the city.

The army claimed that the five hurled stones at settlers’ vehicles during in the area but did not reveal any further details.

On Monday at dawn, three Palestinians were killed by Israeli army fire in the Qalandia refugee camp, north of occupied Jerusalem, while dozens of residents have been injured by live rounds and rubber-coated metal bullets.

The three were killed when undercover forces of the Israeli army infiltrated into the camp to arrest a Palestinian. One of the slain Palestinians worked for the United Nations Work and Relief Agency (UNRWA).

Later in the day, the army invaded the camp again, and kidnapped more than 35 Palestinians, shot and injured several Palestinians during ensuing clashes.
Clashes then erupted in different parts of the occupied West Bank, and dozens of injuries have been reported, especially following the burial ceremonies of the three slain Palestinians.

In related news, a number of soldiers detained, Tuesday, two Palestinians in Yatta town, near the southern West Bank city of Hebron.

Rateb Jabour, coordinator of the National Committee Against the Wall and Settlement in southern Hebron, stated that the soldiers violently attacked Bilal Al-Hathalin, 25, and Tareq Al-Hathalin, 18.

The soldiers claimed that the two were “constructing a room without a permit” in Khirbit Um Al-Kheir area.

Jabour said that the attack is part of organized violations and assaults carried out by the army against Bedouins and villagers in an attempt to force them to leave so that Israel can build and expand its illegal settlements.