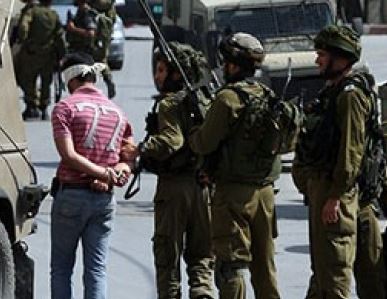 Israeli soldiers invaded on Thursday at dawn [August 29, 2013] various areas in the occupied West Bank, broke into and searched several homes, and a gas station, and kidnapped two residents.Local sources have reported that dozens of soldiers invaded the Al-Obeidiyya town, east of Bethlehem, and kidnapped one resident identified as Yahia Ismael Al-Asa, 22, and took him to an unknown destination after violently breaking into his home.

Furthermore, the army kidnapped one resident, and violently attacked and beat another resident, in Hebron, in the southern part of the West Bank.

Local sources said that Mos’ab Bassam Qattan, 19, was kidnapped in the Old City of Hebron, and that the soldiers claimed he did not cede to their commands to stop.
Several soldiers also violently attacked a resident, identified as Yousef Khaled Shawamra, 20, near the Al-Fawwar refugee camp junction, south of Hebron.

In addition, several soldiers invaded Jalqamous village, near Jenin, broke into and searched the home of Ahmad Ghassan Al-Hajj causing excessive property damage. They also invaded a gas station in near Jenin, and violently searched it.