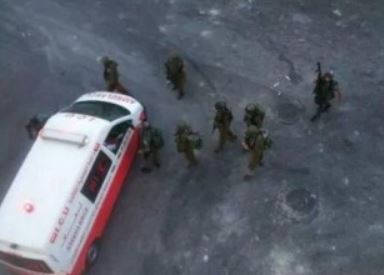 [Thursday August 29, 2013] Dozens of Israeli soldiers surrounded, during early night hours, the Aida refugee camp, north of the West Bank city of Bethlehem, and invaded it leading to clashes with local youths.Local sources in the camp have reported that the army fired dozens of gas bombs and concussion grenades at the protesters, and at a number of homes at the main entrance of the camp.

The Palestine News Network (PNN) has reported that the army stopped a number of ambulances trying to enter the camp to provide medical treatment for wounded Palestinians, and searched them.

The invasion just comes two days after the army invaded the camp, and clashed with dozens of local youths who were protesting the death of three Palestinians who were killed by army fire in Qalandia refugee camp, north of occupied East Jerusalem.

The three were killed when undercover forces of the Israeli army infiltrated into the camp to arrest a Palestinian. One of the slain Palestinians worked for the United Nations Work and Relief Agency (UNRWA).

Later in the day, the army invaded the camp again, and kidnapped more than 35 Palestinians, shot and injured several Palestinians during ensuing clashes.