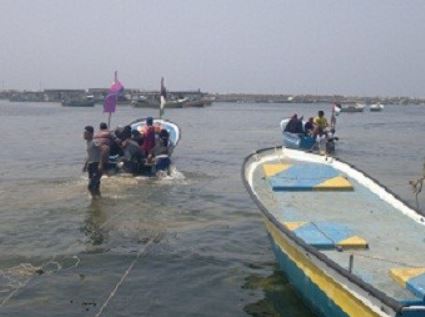 Ayyash added that four of the kidnapped fishermen were working on the same boat, and that they have been identified as Ismail Jamal Basala, Khaled Jamal Basala, Maher Mazen Basala, and Mahmoud Nahedh Basala, while the fifth fisherman was identified as and Radwan Shallouf.

All of the kidnapped are from Rafah, in the southern part of the Gaza Strip’ the navy confiscated their boats.

He further stated that the Egyptian navy also opened fire at several Palestinian fishing boats, wounding two identified as Ismael Wael Al-Bardaweel in the arm and Ibrahim Abdullah An-Najjar in the foot. They were moved to Abu Yousef An-Najjar Hospital in Rafah suffering mild injuries.

Ayyash said that Egypt used to allow the Palestinian fishermen to fish close to its territorial waters, and described the incident as a “worrisome development”.