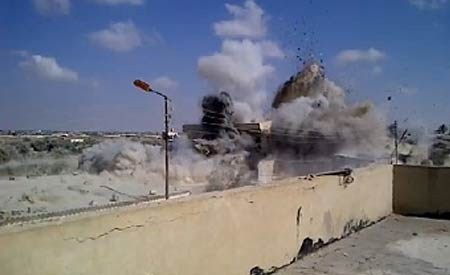 The Egyptian army detonated on Saturday evening [August 31 2013] five siege-busting tunnels across the Gaza-Egypt border area.The Egyptian army said that the five tunnels were found in Salah Ed-Deen Gate area, east of Rafah, in the southern part of the Gaza Strip. Local sources said that loud explosions were heard in the area.

The Egyptian army has been acting on detonating all located tunnels in Gaza, and previous flooded tunnels with waste-water, and even gassed them in some incidents. Most of the tunnels are now either destroyed, or partially destroyed but cannot be used due to serious risks of collapse.

The Palestinians started digging tunnel after Israel imposed its deadly siege on Gaza in 2007, as the siege led to sharp shortages in medical supplies, and emptied the shelves of Gaza stores and shops.

More than 400 patients, including infants and children died due to the siege. Many patients died while waiting permits from Israel to cross the border for medical treatment.

At least 232 Palestinians have also been killed in tunnel collapse accidents since the siege was imposed on Gaza. This number includes at least 20 Palestinians who were killed after the Israeli army bombarded several tunnels as they were in them.