Soldiers Kidnap A Palestinian In Hebron 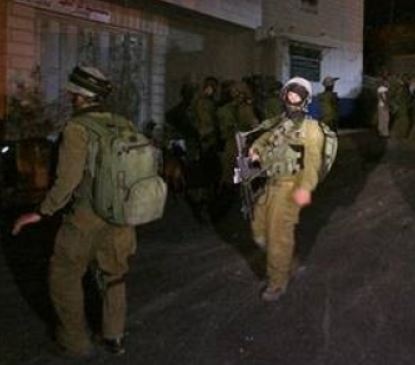 Local sources have reported, Monday [September 2 2013] that several armored Israeli military jeeps invaded the southern West Bank city of Hebron, searched a number of homes and kidnapped one resident.The sources said that the soldiers kidnapped Amir Mohammad Ash-Shammas, after violently breaking into his home and searching it causing excessive damage.

The soldiers also broke into and searched several homes in the city, and installed a number of temporary roadblocks in the area.

Local sources in the camp have reported that the army forced several families out of their homes, and interrogated them for several hours.

Also on Monday, soldiers kidnapped nine Palestinians from the West Bank district of Bethlehem, after violently breaking into their homes and searching them. Three more Palestinians, also from Bethlehem, have been kidnapped by the army in occupied East Jerusalem.

The violations are the latest of daily and ongoing Israeli military assaults against the Palestinians and their property in the occupied territories.