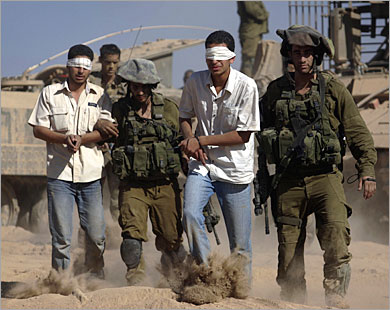 Israeli soldiers invaded, late on Monday at night and on Tuesday at dawn, various districts in the occupied West bank, and kidnapped seven Palestinians, including a child in Hebron, and a young woman in occupied East Jerusalem.Mohammad Ayyad Awad, spokesperson of the Popular Committee against the Wall and Settlements in Beit Ummar, near Hebron, stated that dozens of soldiers broke into a construction site and kidnapped one worker identified as Eyad Omar Sabarna, 23.

Awad added that the soldiers also kidnapped a child near the Karmie Tzur illegal settlement, built on Palestinian lands that belong to the residents of the nearby Halhoul town, near Hebron.

The child has been identified as Ahmad Thaher Abu Ayyash, 15. The army cuffed the child, and took him to an unknown destination.

Furthermore, soldiers kidnapped a young Palestinian woman in Al-Ezariyya town, southeast of occupied East Jerusalem, and took her to the Police Station in Maale Adumim settlement.

Eyewitnesses have reported that several soldiers and police officers stopped the woman as she was driving her car near the junction between Maale Adumim and Al-Ezariyya.

In addition, soldiers invaded Jenin city, in the northern part of the West Bank, broke into and searched several homes before kidnapping three residents and assaulting a fourth.

Local sources said that the soldiers invaded the eastern neighborhood in Jenin, and kidnapped one resident identified as Odai Ba’jawy, 20.

Soldiers also assaulted Baha’, the brother of Odai, and hit him on the head with their rifles. Baha’ was moved to the Jenin Governmental Hospital suffered concussion and bruises.

Soldiers forced the family into two rooms, and violently searched the house causing excessive damage.
The army also kidnapped Salim Yasser Mer’ey, 21, after violently breaking into his home and searching it.

In related news, dozens of soldiers invaded Jaba’ village, south of Jenin, and kidnapped one resident identified as Mahmoud Salatna after confiscating his computer. They also broke into a sheep farm in Jaba’ and searched it.

Late on Tuesday at night, dozens of soldiers invaded Sanour village, near Jenin, kidnapped one resident identified as Mustafa Walad-Ali, 22, and handed seventeen young men military warrants ordering them to head to the Salem military base for interrogation.

Local youths hurled stones at the invading soldiers who fired dozens of gas bombs and concussion grenades; fifteen Palestinians have been injured in the attack.
The arrests are part of ongoing and daily Israeli violations against the Palestinians in the occupied territories.

On Monday, the army kidnapped at least thirteen Palestinians, twelve of them from the West bank city of Bethlehem, and one from Hebron.