Barghouthi: “Talks With Israel Only Lead To A Mirage” 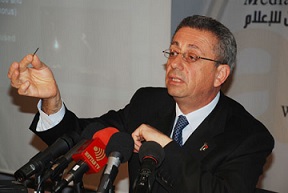 Monday [September 3, 2013] Secretary General of the Palestinian National Initiative, Dr. Mustafa Barghouthi, called for stopping direct talks with Tel Aviv, and said that these talks are meaningless, and will only lead to a mirage without a positive outcome.Dr. Barghouthi said that talks cannot be held while Israel is ongoing with its violations and assaults, amidst ongoing and seriously escalating settlement construction and expansion activities, especially in occupied East Jerusalem, and home demolitions in the Jordan valley.

He said that Israel is using the resumption of direct talks as a cover-up for its crimes and assaults, and its illegitimate settlement activities.

“Five Palestinians have been killed by the army since direct talks started”, Barghouthi added.

He further said that the army kidnapped more than a hundred Palestinians since it released 26 detainees, imprisoned since 1993, as part of the deal for the resumption of peace talks.

“Israel is practicing ethnic cleansing against the Palestinian people”, Dr. Barghouthi said, “At least 800 Palestinians have been displaced since the beginning of the year as Israel demolished more than 400 homes in Jerusalem and the Jordan Valley”.

He called on the Palestinian leadership to think of alternatives to negotiations with Tel Aviv as it is using the talks, and using the current situation in the Arab world, in order to implement “a policy of total segregation, and racial discrimination in the occupied Palestinian territories.”

“Betting on negotiations with the Netanyahu government is just an illusion, a mirage”, Dr. Barghouthi said, “We need a strategy of national unity, restoring democracy, a significant increase of popular resistance against Israel’s Apartheid Wall and settlements, and complete boycott of all Israeli products”.