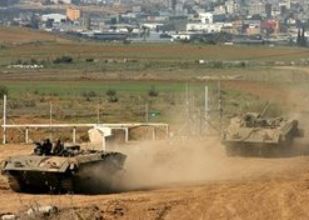 The vehicles advanced hundreds of meters into the area firing dozens of rounds of live ammunition; no clashes or injuries have been reported.

On Monday, a number of military vehicles invaded an area, east of Gaza City, and Palestinian fighters managed to detonate an explosive charge in one of the armored military bulldozers.

On Tuesday evening [August 13, 2013], Palestinian medical sources have reported that three fishermen have been detained, and violently attacked by Israeli soldiers, in Palestinian territorial waters, resulting in moderate injuries.

The body of the slain Palestinian, identified as Hussein Abdul-Hadi Awadallah, 30, was handed by Israel to the Palestinian side in Gaza. He is from An-Nusseirat refugee camp, in central Gaza.