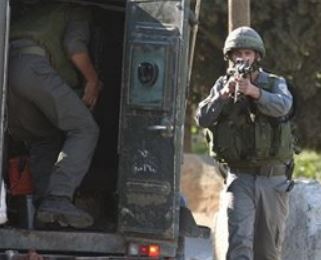 Palestinian sources in Abu Dis town, in occupied East Jerusalem, have reported that clashes took place between dozens of local youths and Israeli soldiers after the army kidnapped a young Palestinian man suffering from cancer.Anwar Bader, a political leader of Fateh movement in Jerusalem, stated that dozens of soldiers invaded Abu Dis, fired gas bombs, concussion grenades, and rubber-coated metal bullets at the residents, and at a number of homes.

Medical sources said that dozens of residents have been treated for the effects of teargas inhalation.
Bader added that local youths closed main streets with burning tires, and hurled stones at the invading soldiers, especially near the Western Mountain and the main road of Abu Dis.

Earlier on Tuesday, undercover units of the Israeli army infiltrated into Abu Dis and kidnapped Hatheefa Ahmad Bader, 22, and took him to an unknown destination.

Bader has been wanted by the occupation for several months, and the army carried out several attempts to kidnap him.

The undercover soldiers drove the two cars until reaching a residential building, near the Al-Quds University, and invaded the building while regular army units invaded the area and surrounded it. They then kidnapped Bader and took him to an unknown destination.