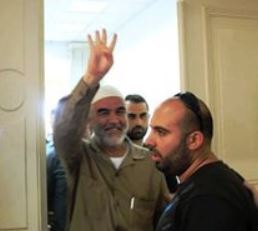 The Israeli Radio has reported that head of the Islamic Movement, Sheikh Raed Salah, has agreed to be released from prison in exchange for being denied entry into Jerusalem, and the Al-Aqsa Mosque, for six months.According to the report, Salah has to remain at least 30 kilometers away from Jerusalem for a period of 180 days.

In related news, the Israeli Police prevented 15 buses, carrying members of the Islamic Movement, from entering the Old City of Jerusalem, and the residents on-board were also denied access to the Al-Aqsa Mosque.

Tuesday evening [September 3, 2013] Detained head of the Northern Branch of the Islamic Movement in historic Palestine, Sheikh Raed Salah, rejected a ruling by the District Court in occupied Jerusalem conditioning his release with being denied the right to enter Jerusalem and the Al-Aqsa Mosque for six months.

The Israeli prosecution claimed that Salah “incited violence and racism” during Friday sermon he gave at a mosque in Kofor Qari’ village, in the Northern Triangle area.

During his sermon, Sheikh Salah denounced what he called “the military coup” in Egypt, and the massacres against the Syrian people.

His defense attorney, Khaled Zabarqa, stated that the court ruled that Sheikh Salah should be at least 30 kilometers (18.6 Miles) away from Jerusalem for six months, and that the court ordered Salah to pay a 50.000 NIS (nearly $15.000) fine.

The Sheikh rejected the Israeli ruling, and told that court “the Israeli judicial system seems to be employed by extremist Israeli groups that keep invading the Al-Aqsa Mosque”.

“The court believes that the presence of Muslims in the mosque this Wednesday will obstruct Jewish groups from praying in it”, Sheikh Salah said, “This statement by itself is a clear admission from the court that it sides with extremists instead of being a non-biased legal entity”.

His lawyer said that Salah never accepted the conditions of the court, and legally challenged the court’s decision to prevent him from entering the holy city of Jerusalem, and the Al-Aqsa Mosque.

“The court does not want Sheikh Salah to enter Jerusalem, wants to keep him out of the Al-Aqsa Mosque in the city”, the lawyer said.

It was worth mentioning that Sheikh Salah has been repeatedly kidnapped and imprisoned by Israel, and several rulings were issued against him preventing him from entering Jerusalem and the Al-Aqsa mosque for six months each time.