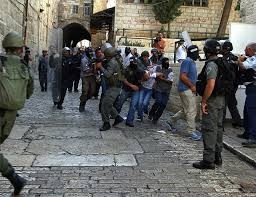 Palestinian medical sources in occupied Jerusalem have reported that several children and women were among the injured after extremist Israelis broke into the yards of the Al-Aqsa Mosque since early dawn hours Wednesday [August 4 2013]. Fifty Palestinians have been kidnapped in the Mosque area overnight.The sources said that a Palestinian child, identified as Ahmad Sa’id Marar, 11, was shot by a rubber-coated metal bullet, while several women in the mosque were injured after being sprayed with pepper spray.

Head of the Islamic Waqf and Endowment Department in Jerusalem, Sheikh Azzam Khatib Tamimi, held Israel responsible for the clashes in the Al-Aqsa Mosque, and for not protecting the holy sites from fanatic extremist Israeli groups.

Khatib added that the Waqf department had requested the Israeli police to close the Al-Magharba Gate, in order to prevent the extremists from invading the mosque, but the Police did not even respond.

“The extremists openly and clearly expressed their intentions to invade the mosque today”, Khatib said, “Now, they are implementing their threats”.

In related news, Israeli soldiers prevented the Grand Mufti of Jerusalem and the Holy Lands, head of the Higher Fatwa Committee, Sheikh Mohammad Hussein, and various religious and social figures, from entering the Al-Aqsa Mosque, and detained them in Bab Hatta area.

One of the workers of the Al-Aqsa mosque stated that the Israeli army and police kidnapped more than 50 Palestinians in the Al-Aqsa Mosque, after the police broke into it and dragged the residents out.

It is worth mentioning that hundreds of Israeli soldiers and police officers have been deployed in different areas in the Old City of occupied Jerusalem, and around the Al-Aqsa Mosque.

The police also interrogated dozens of residents while inspecting their ID cards.

Various extremist groups in Israel have called for attacking the Al-Aqsa mosque on the eve of the New Jewish Year, today Wednesday. The call pushed hundreds of Palestinian to flock to the mosque in an attempt to stop the extremists.