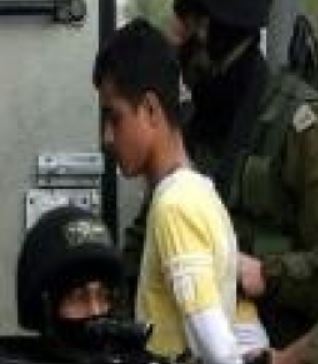 [Wednesday September 4 2013] Mohammad Awad, spokesperson of the Popular Committee against Settlements, in Beit Ummar town, near the southern West Bank city of Hebron, stated that approximately 200 Israeli soldiers invaded the town, earlier at dawn, and kidnapped three children.He said that the soldiers invaded the town driving nearly 25 armored vehicles through its main entrance and its southern entrance, near the Karmie Trzur illegal settlement.

Soldiers also invaded the home of Mustafa Mohammad Awad, and kidnapped his son Ra’fat, 16, in addition to violently attacking his brother Mohammad, 17. Despite his young age, Ra’fat is a former political prisoner who was imprisoned by Israel.

Clashes have been reported between the invading soldiers and dozens of local youths who hurled stones and empty bottles at them. Dozens of residents have been treated for the effects of teargas inhalation.

In related news, a number of extremist Israeli settlers attacked, on Wednesday, a Palestinian man and his 12-year-old daughter in Tel Romeida neighborhood in the center of Hebron.

Local sources said that the settlers violently attacked Shatha Ishaq Ramadan, 12, and her father, and added that dozens of soldiers invaded the neighborhood and attacked several residents. The Child and her father suffered cuts and bruises.