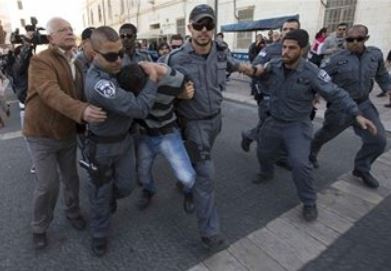 A number of Israeli Police officers invaded the Al-Suwwana neighborhood, in occupied East Jerusalem, and kidnapped a Palestinian child.The attack came after a number of extremist Israeli settlers of the Beit Orit illegal settlement, invaded the neighborhood.

Resident Ahmad Al-‘Ammoury stated that a number of settlers of Beit Orit, built on Palestinian lands in front of the neighborhood, hurled stones at the residents and their homes without any provocation.

The incident led to clashes between local residents and the settlers; the Israeli police then invaded the neighborhood and broke into homes that belong to the families of Al-’Ammoury, Barakat, Abu Al-Hawa and Al-Imam.

The police kidnapped a child, identified as Mousa Abu Al-Hawa, after breaking into his family’s home.

The attack comes amidst escalating violations and assaults carried out by the police, the army, and extremist settler groups, especially amidst attempts to invade the Al-Aqsa Mosque, and the increasing takeover of Palestinian homes and lands for the benefit of illegal settlement activities.