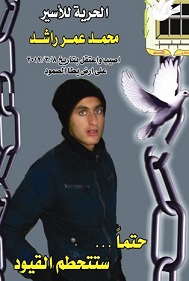 The Ofer Israeli military court sentenced on Wednesday [September 4 2013] Mohammad Omar Rashed, 17, from Yatta town, near the southern West bank city of Hebron, to 14 years, including five on parole, and ordered him to pay a 6000 NIS fine.Rashed was kidnapped on March 8 2012 when dozens of Israeli soldiers invaded Yatta town, and killed a resident identified as Zakariyya Abu Arram.

Rashed was shot by several rounds of live ammunition in the back and the pelvis, causing serious injuries. Parts of his intestines have also been removed.
He was violently attacked and beaten by the soldiers after they shot him, as the army claimed that he tried to stab one of the soldiers.

Various human rights and legal groups in Palestine denounced the arrest and sentencing of Rashed.

The Palestinian Center for Human Rights (PCHR) said that prosecuting the seriously injured teen, and the fact that he was beaten and kicked after he was shot, is a direct violation of International Law and the Fourth Geneva Convention.

However, the order fails to correct many of the fair trial deficiencies in the military courts relating to children (including insufficient provisions regarding qualifications for the judges, no added protections during interrogations, and discretionary language granting the prosecutor broad authority to suspend protections for children), which indicate that Military Order 1644 will do little to improve the protection of Palestinian children before the Israeli military legal system.

While the UN Convention on the Rights of the Child defines a “child” as “every human being below the age of eighteen years”, according to Israeli military order 132, Palestinian children age 16 and older were previously tried and sentenced by Israeli military courts as adults.

A Palestinian child’s sentence is decided on the basis of the child’s age at the time of sentencing, and not at the time when the alleged offense was committed.

Thus, a child who is accused of committing an offense when he or she is 15 will therefore be punished as an adult if he or she has a birthday while awaiting sentencing.