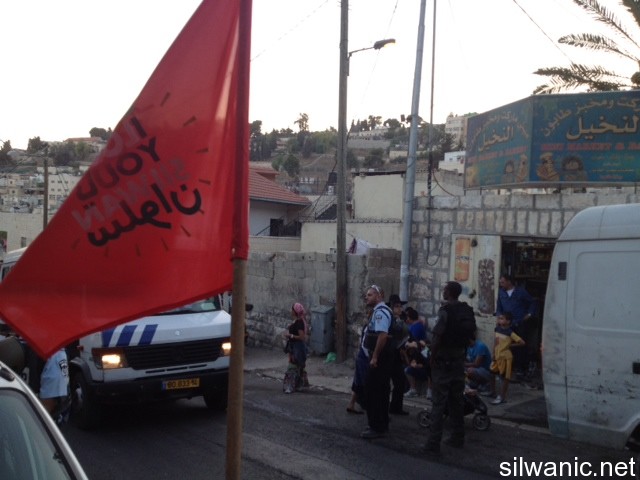 Dozens of Israeli soldiers invaded on Thursday evening [September 5, 2013] Wadi Hilweh in Silwan town, in occupied East Jerusalem, apparently in an attempt to kidnap some local youths.The Wadi Hilweh Information Center in Silwan has reported that dozens of settlers invaded the neighborhood, and that a number of children and youths raised Palestinian flags and signs the read “I Love You Silwan”.

The settlers then attacked the children, and tried to remove the Palestinian flags and signs by forces.

The Center added that dozens of soldiers and Border Guard officers invaded the town, especially Wadi Hilweh, and confiscated the flags from the children.

It added that, as evening prayers started at the local mosque, a number of fundamentalist settlers starting dancing in a provocative manner, leading to further tension in the area.

Also on Thursday, Israeli police officer invaded the Al-Suwwana neighborhood, in occupied East Jerusalem, violently broke into and searched a number of homes, and kidnapped a Palestinian child.

The invasion came just after a number of extremist Israeli settler of Beit Orit settlement in the town, harassed and attacked a number of children leading to clashes between local youths and the settlers.

The kidnapped child has been identified as Mousa Abu Al-Hawa; he was taken prisoner after a number of soldiers broke into his family’s home.