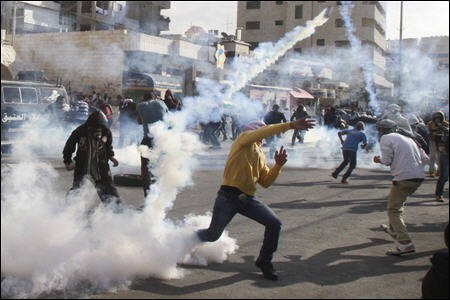 Thursday evening [September 5, 2013] Dozens of Israeli soldiers invaded the Al-Fawwar refugee camp, south of the southern West Bank city of Hebron, and clashed with local youths.Local sources have reported that dozens of Israeli military jeeps surrounded the camp, while a number of units that were stationed at the entrance of the camp fired several gas bombs at the residents.

The sources said that clashes took when several armored military jeeps invaded the camp, and that the soldiers fired more gas bombs and rubber-coated metal bullets; dozens of residents received treatment for the effects of teargas inhalation.

Some of the gas bombs fired by the soldiers hit a number of homes causing several injuries among the residents, including children and infants.

In related news, soldiers installed a sudden roadblock near bypass road #60, north of Hebron, stopped and searched dozens of vehicles, and interrogated the residents before kidnapping a college student identified as Sobhi Ali Jawabra, 20.

The army also installed a roadblock in Tarama area, south of Hebron, and also searched dozens of vehicles and interrogated the residents.