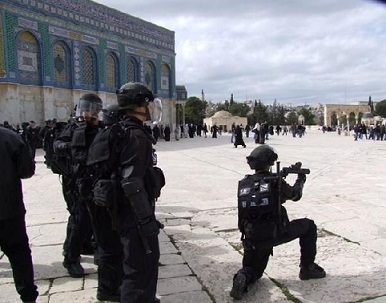 Palestinian medical sources have reported that dozens of worshipers have been injured on Friday [September 6 2013] after Israeli soldiers fired gas bombs,rubber-coated metal bullets, and used pepper spray, at Palestinians in the yards of the mosque following Friday noon prayers.Eyewitnesses said that undercover soldiers of the Israeli military infiltrated into the yards of the mosque through the Al-Magharaba Gate, and surrounded the worshipers in the Al-Qibly Mosque by placing iron barriers around it.

A number of youths hurled stones at the invading soldiers, and the army fired gas bombs and rubber-coated metal bullets, and sprayed some worshipers with pepper-spray.

The soldiers also forced local reporters out of the mosque area, and prevented them from documenting the attack. Several journalists were also forced out.

Medical sources said that dozens have been treated for the effects of teargas inhalation, while others suffered cuts and bruises after being hit by rubber-coated metal bullets; all were moved to local clinics and hospitals.

The sources said that at least fifty Palestinians were injured in the attack; 20 were shot by rubber-coated metal bullets, and at least thirty have been treated for the effects of teargas inhalation.