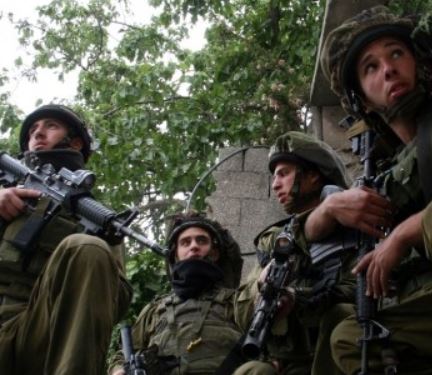 Israeli soldiers invaded on Saturday at dawn [September 7, 2013] the Al-Arroub refugee camp, north of the southern West Bank city of Hebron, and kidnapped nearly 40 Palestinians.The army claimed that the invasion was carried out following clashes with local youths, in which some youths managed to burn a military tower installed at the entrance of the camp.

The army invaded dozens of homes in the camp by breaking or detonating their front doors, and violently searched the properties causing excessive damage.

The soldiers then detained dozens of youths, including children, cuffed and blindfolded them, and took them out of the camp.

Resident Ahmad Abu Kheiran, coordinator of the Popular Committee in southern West Bank refugee camps, stated that the soldiers attacked the residents while dragging them out of their homes.

He added that the soldiers released some of the kidnapped residents after interrogating them. The army is still surrounded the camp.