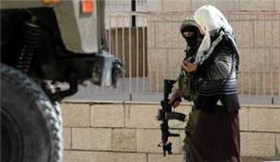 Israeli soldiers kidnapped, on Sunday evening [September 8, 2013] a young Palestinian woman in Hebron, in the southern part of the occupied West Bank. Local sources said that the young woman has been identified as Ayaat Mahfouth, 20, and that she is was previously kidnapped and imprisoned twice, and was released from an Israeli detention facility a month ago.

The soldiers claimed that she carried a knife, and attempted to stab a soldier.

Several extremist settlers also prevented farmers from reaching their lands in a number of areas south of Hebron, and hurled stones at Palestinian cars causing damage.