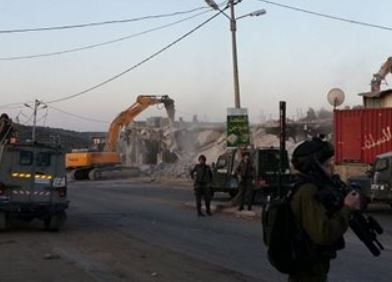 Soldiers also confiscated two tractors and several computers that belong to the company; excessive damage has been reported as the soldiers violently broke into and searched the property.

Furthermore, soldiers kidnapped Majdi Sheikh after breaking into his home in Kufur Ra’ey village, near Jenin, and took him to an unknown destination.

On Wednesday evening, soldiers stationed at the Huwwara roadblock, near Nablus, kidnapped two residents identified as Anas Sukkar, from Sielet Ath-Thaher village, and Mohammad Yousef Kamil, from Qabatia. Both are students of the An-Najah University in Nablus.

Earlier on Wednesday, dozens of soldiers invaded Barta’a Ash-Sharqiyya village, south west of Jenin, and demolished a building located behind the Annexation Wall.

Dozens of residents have been treated for the effects of teargas inhalation during clashes that took place between the residents and the invading soldiers.

Local sources have reported that the soldiers completely surrounded the village, and declared it a closed military zone.

The sources added that dozens of local youths hurled stones at the invading soldiers, and that the army fired rounds of live ammunition, rubber-coated metal bullets, gas bombs and concussion grenades.

Dozens of residents have been treated for the effects of teargas inhalation.

A month ago, soldiers handed orders against twenty stores in the village, and demolished eleven of them so far.