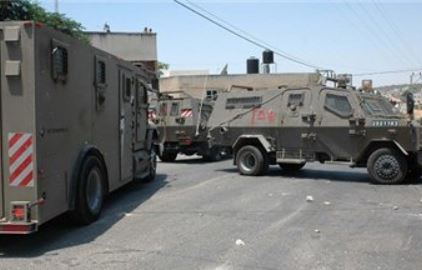 Palestinian medical sources in Nablus, in the northern part of the West Bank, have reported that seven residents have been injured by Israeli army fire after dozens of soldiers invaded the Askar refugee camp, east of the city, and kidnapped several residents.Local sources said that the soldiers invaded the camp and fired gas bombs, concussion grenades and flares, wounding seven Palestinians.

Four of the wounded have been identified as Morad Abu Msallam, Thaer Qndeel, Ameed Abu Syaf and Husam Qatnany who was also kidnapped by army fire.

Soldiers also kidnapped a father and his two sons after violently breaking into their home and searching it. The three have been identified as Imad Abu Tayyoun, and his sons Abdullah and Abboud.

Furthermore, medical sources have reported that a Palestinian youth was moderately injured after being shot by Israeli soldiers near the Joseph Tomb, in Nablus.

The army claimed that the soldiers shot the young man after he opened fire at them; Israeli medics moved the wounded man to Beilinson Hospital in Petah Tikva.

Local sources said that several Israeli buses and military jeeps invaded the city, and surrounded the Joseph Tomb area, near the Balata refugee camp in the city, and prevented the Palestinian from approaching it so that the settlers can pray in the tomb.

Clashes have been reported between local youths and the soldiers; locals hurled stones and Molotov cocktails while the soldiers fired rounds of live ammunition, and rubber-coated metal bullets.