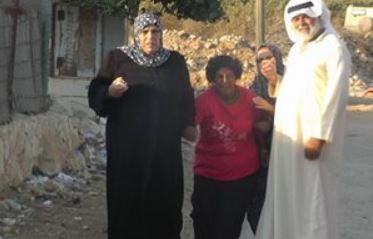 Friday evening [September 13, 2013] A number of Israeli soldiers violently attacked a mentally challenged Palestinian woman in Beit Ummar town, near the southern West Bank city of Hebron.Mohammad Ayyad Awad, spokesperson of the Popular Committee Against the Wall and Settlements in Beit Ummar, has reported that dozens of soldiers invaded the home of Khalil Abu Dayya, in Safa area, and violently searched it.

He stated that the woman, Nabila, 29 years old, tried to stop the soldiers who then violently attacked her, and went on to violently kick and push her around.

Her brother tried to intervene but the soldiers threw a concussion grenade at him, and continued to beat the woman leading to various cuts and bruises to several parts of her body.

Awad said that Nabila’s brother tried to tell the soldiers that his sister in mentally challenged, but they just kept beating her.

The attack led to clashes between the soldiers and dozens of local youths; the army fired gas bombs and concussion grenades leading to several injuries.

Awad stated that he believes the army invaded Safa area due to a fire that broke out in some trees that belong to Jewish settlers living nearby.

More than a week ago, a number of Israeli soldiers and undercover soldiers of the army attacked a mentally challenged young Palestinian man in Al-Isawiyya town, in occupied East Jerusalem, and violently beat him after forcing him into the ground and stepping on him.

Ahmad Obeid was also kidnapped by the soldiers, and was released later on but was placed under house arrest awaiting trial. The Jerusalem District Court never set a trial date.