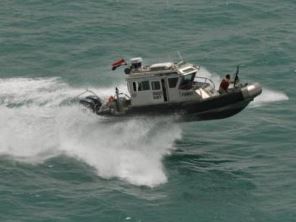 The Egyptian boats then opened fire at several Palestinian fishing boats, close to the Rafah Port and the Naval Police headquarters, before boarding a fishing boat and arresting Omar Mohammad Bardaweel.

On Thursday, two Egyptian army tanks crossed the Gaza-Egypt wired border fence, but did not cross into the Palestinian side, media sources in Gaza said.

Eyewitnesses said that the two tanks reportedly crossed through the first border fence, and drove next to the concrete wall Egypt is building along the border with Gaza.

Islam Shahwan, spokesperson of the Ministry of Interior in Gaza, denied the report, and that the not a single Egyptian tank crossed the border, and called on local media outlets to ensure the accuracy of their reports.