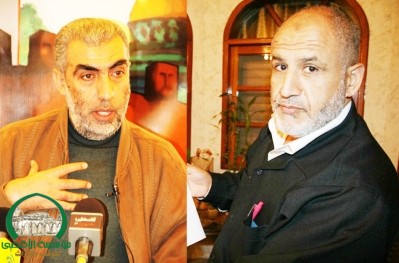 [Tuesday September 17, 2013] The Israeli Police arrested the deputy head of the Islamic Movement in Historic Palestine, Sheikh Kamal Khatib, and the movement’s Advisor for Jerusalem and Al-Aqsa Mosque Affairs, Ali Abu Sheikha.The Al-Aqsa Foundation for Waqf and Heritage issued a statement revealing that the Israeli Police is accusing the two officials of “incitement that led to violence and disorder in the Al-Aqsa Mosque area”.

They will be sent to the District Court in occupied Jerusalem on Wednesday, the Foundation said.

Sheikh Khatib was kidnapped when the Police approached him as he was heading to the Al-Aqsa Mosque for evening prayers, while Sheikh Abu Sheikha was ordered to head to the Al-Maskobiyya detention and interrogation facility.

Both officials were interrogated in room 4 in Al-Maskobiyya, known as “minorities’ interrogation room”, the Al-Aqsa Foundation said.

“This is why Israel keeps kidnapping and interrogating any person who defends the mosque, and exposes the illegal Israeli plans, and the ongoing attacks carried out by extremist settlers”, Njeidat added.