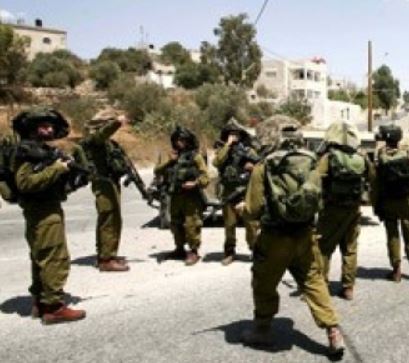 The Popular Committee Against the Wall and Settlements Hebron, in the southern part of the West Bank, has reported that Israeli soldiers kidnapped two Palestinians from the Al-Hadeediyya area, east of Yatta town.Rateb Jabour, Coordinator of the Committee, stated that the soldiers kidnapped Yasser Zakary and Sabha, 45, and Morad Ahmad Abu Oleyyan, 19, after violently breaking into their homes and searching him.

The two were cuffed, and blindfolded, before the army took them to an unknown destination.

In related news, soldiers kidnapped two Palestinians near Juhr Ed-Deek area, in central Gaza after claiming they tried to infiltrate into Israel.

Soldiers also opened fire at the Al-Boreij refugee camp in Gaza, causing no injuries or damages.

The assaults are part of ongoing violations, and assaults, carried out by Israeli soldiers in the occupied West Bank, targeting civilians and their property.

These attacks are also accompanied by escalating assaults carried out by extremist settler groups.