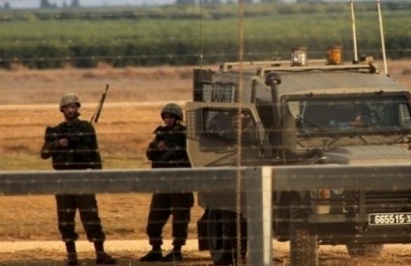 Thursday morning [September 19 2013] Two Palestinians have been kidnapped by Israeli soldiers in the Juhr Ad-Deek area, in central Gaza, allegedly after they tried to cross the border fence into Israel.Local sources have reported that several Israeli military jeeps noticed the two close to the border fence, and arrested them after forcing them to remove their clothing.

The two were chained, and placed in one of the military jeep before being moved to a settlement close to the border with Gaza.

In related news, soldiers fired several rounds of live ammunition into the Al-Boreij refugee camp, in central Gaza, causing damage but no injuries.

Eyewitnesses said that the rounds came from military towers across the border, near Al-Boreij, and targeted a number of homes and farmlands.

Earlier on Thursday, soldiers invaded Yatta town, near southern West Bank city of Hebron, and kidnapped two Palestinians after violently breaking into their homes, and searching them.